Irish Times: Irish scientist optimistic alpaca can be ally in the fight against Covid-19

The South American alpaca may seem like an unlikely ally in humanity’s fight to overcome the coronavirus, but an Irish scientist believes the mammal is key to developing an effective treatment against the disease.

Dr Peter Durcan, who is based in Cape Town, South Africa, has spent the last year investigating whether alpaca antibodies, produced by its immune system to fight off infections, can be used to treat people with Covid-19.

Despite having to overcome pandemic-related logistical challenges to get his project off the ground, Durcan says recent laboratory test results involving the UK and South African Covid variants have given huge cause for optimism.

We have received results from two different labs that show some of our alpaca antibodies are very potent at neutralising both Covid-19 variants,” he said.

“Based on this, we believe they hold out great promise as potential therapeutic treatments, particularly in the context of the current vaccine delays.” 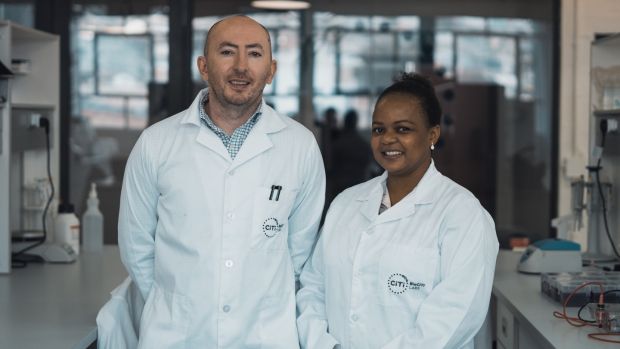 Dr Peter Durcan, founder and chief scientific officer of Afrobodies at his lab in Cape Town with his business partner and wife Benedicta: promising results.

Durcan’s journey of discovery began shortly after the pandemic began early last year, when he and business partner Benedicta, who is also his wife, hit upon the idea of starting an immunisation programme using their alpacas to develop antibodies that could neutralise the virus.

The couple in 2016 established a biotech company called Afrobodies that has since been producing custom-made alpaca antibodies primarily for agricultural and life-science research purposes.

“I knew from working with the animals’ antibodies that they were very potent against viruses generally, but there was a high degree of speculation on whether they could work against Covid-19,” said Durcan, who is Afrobodies’ chief scientific officer.

The 37 year old, from Curry in Co Sligo, and his team were initially forced to work around global restrictions to prove the efficacy of the antibodies against the virus. Indeed, the laboratory in Durban that Afrobodies primarily used to conduct tests was closed due to a hard national lockdown in late March. Flights to ship samples of their antibodies to countries with operational laboratory facilities were also hard to secure.

Nevertheless, Durcan was eventually connected with the Centre for Virus Research at the University of Glasgow, which went on to establish that under laboratory conditions that their antibodies could stop Covid-19 from infecting human cells. More recently the scientists in Scotland have shown that five of the eight alpaca antibodies Afrobodies managed to isolate had “demonstrated a neutralising effect when added to human cells” along with Covid-19, he said.

Potentially even more important, however, are the results the Africa Health Research Institute (AHRI) in South Africa KwaZulu-Natal province recorded in January after testing the antibodies’ impact on the local Covid-19 variant, which is highly transmissible.

Infection and immunity PhD student Shi-Hsia Hwa, who works at the AHRI, confirmed that two of the antibodies they tested on live cultures of the local variant grown in their labs had effectively neutralised the virus.

Durcan went on to say he believed these two antibodies were the most primary therapeutic candidates globally for the treatment of Covid-19. While other biotech companies are working with alpaca antibodies, none have delivered positive results against the South African variant of the disease to date, he says.

“Given that studies are emerging that indicate some vaccines do not work very well, it is crucial to have an effective treatment against the disease as well,” he said.

“We believe our alpaca antibodies would be best administered using an inhaler as they are 10 times smaller than human antibodies, which enables them to be more effectively delivered to a person’s lungs.”

Durcan, whose career began with a sports science degree at the University of Limerick before he moved on to study a PhD at Manchester Metropolitan University, said Afrobodies has two options going forward. It could either partner with a large pharmaceutical firm to bring their project forward for human trials, or it could try to raise money to develop the treatment themselves.

“We have decided to crowdfund the next stage of testing for our alpaca antibodies, and are setting up a new company called Covid Impilo [the Zulu word for health] to facilitate this,” he explained. “Afrobodies will transfer the rights to the antibodies to Covid Impilo, and it will then seek to raise public money for their further development.”